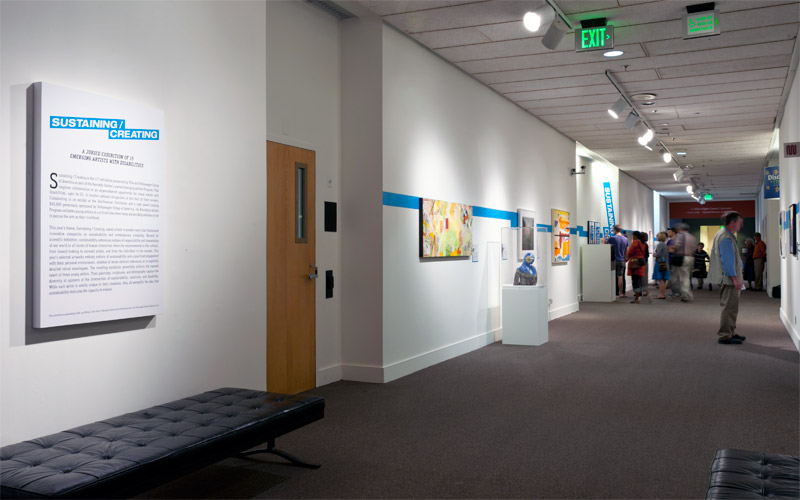 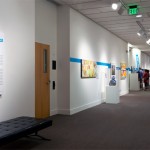 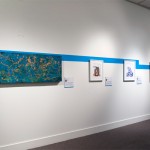 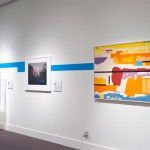 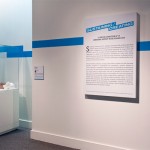 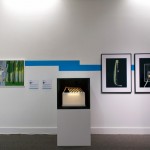 Sustaining / Creating is the 2012 iteration of the annual Emerging Artists exhibition produced by VSA and Volkswagen Group of America highlighting 15 young artists with disabilities. Having designed for several of VSA’s exhibits in the past, I was asked to take on the full design of the entire exhibition: logo, identity, all collaterals, and where possible the exhibition space. Unique to this project, VSA’s work specializes in artists with disabilities and as with all museums and exhibitions the project must remain entirely accessible in all forms. Simultaneously to the project constraints of tight deadlines, an extremely tight budget, and designing under approval of the larger Kennedy Center institution, I faced the minor constraint of working remotely across the country: the exhibit, VSA, and Kennedy Center are all located in Washington, D.C. and I am in Los Angeles. Ultimately the project’s collaterals and production were a major success, regardless of the rounds of iterations, review processes and odd, unforeseen circumstances that would occur with any project of large-scale.


Three separate printers were used during the production of collaterals: two in Washington, D.C. based off of relationship and budget constraints for VSA and one printer locally in Southern California which was chosen by myself for their quality of production, timely turnaround, and exceedingly budget-friendly pricing. Despite variations in printers, I was able to produce a design and files which would be communicated to any printer with a consistency in color and finished product. Where I felt it was necessary, the local printer was used in order to allow for personal, hardcopy press checks prior to the final print run. 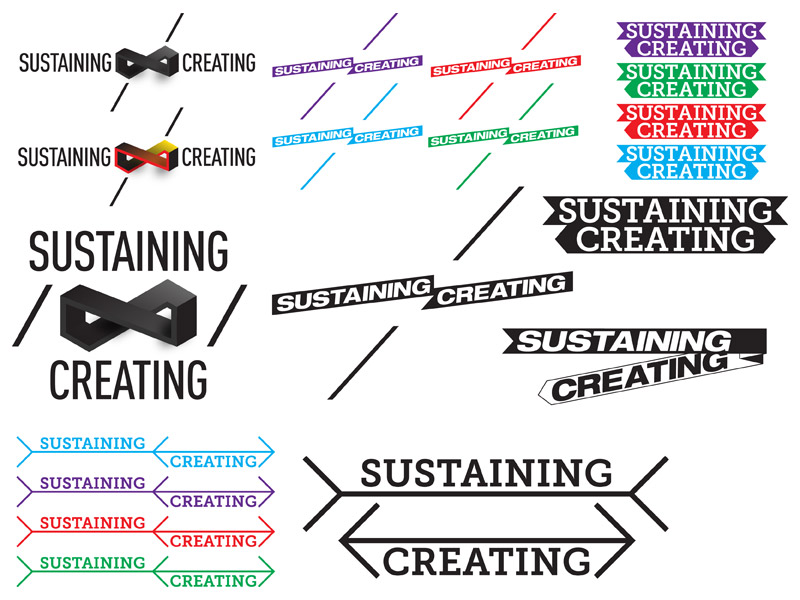 The logos above are a sampling of the many exploratory variations that were developed for the Sustaining / Creating exhibit for VSA and Volkswagen Group of America. The logo and theme were developed based off of discussion and interviews with VSA and Volkswagen defining the concept behind the name itself. The logos developed were plays on ideas of sustaining and creating, two seemingly different actions which work in unison. The initial final logo that was selected is displayed at the bottom: a play off of a visual conundrum. The two lines are in fact the same length, but it is the direction of the arrows – inwards for sustaining, outwards for creating – that make the lengths of the lines appear different.

The logo above is the final developed and selected logo for the Sustaining/Creating Exhibit for VSA and Volkswagen Group of America. It is the result of several rounds of discussions, a choice for a ‘final logo’ being used on initial collateral and further discussions within the depths of the Kennedy Center’s institution requesting further development and ultimately a dramatic change. Historically logos for exhibits had been purely text-based and best defined as "blocky." Convincing the Kennedy Center to put faith in a new, happy medium between the traditional standard and an effort to move forward to a contemporary style took some bold steps, however the results speak for themselves. As the exhibit’s collateral continued to take shape and the space itself developed, hesitation evolved into enthusiasm and high praise for VSA’s innovative production.

The timeline of the overall exhibit involved an initial call for art several months before any further collateral would be even conceived for the project. The Call for Art postcard was also under pressing deadlines: immediately following the announcement of the exhibition by VSA/Volkswagen, schools throughout the country were approaching the end of their academic years. It was necessary and vital to have these postcards in the hands of potential applicants, instructors, and on the table tops of any local resources as soon as possible. Production and mailing of these cards took place in Washington, D.C. as it was not necessary to engage in a full press check in this instance. Ultimately, as described in the logo section, a new logo was developed in between the Call for Art postcards and the Opening Invitations. 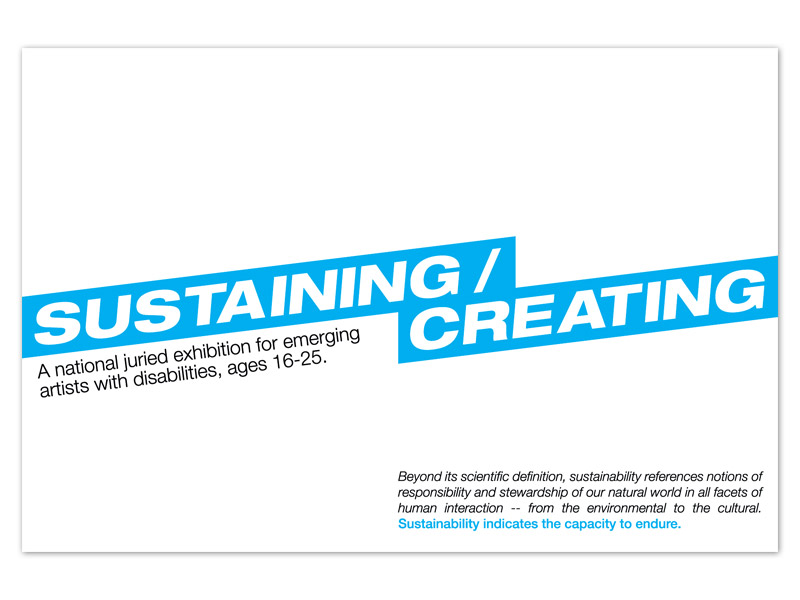 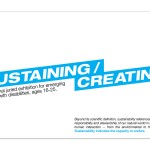 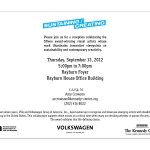 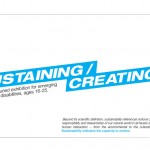 The first of many collaterals for the exhibition, the Opening Invitations would need to be sent out to prospective attendees, dignitaries and other V.I.Ps well in advance of the exhibition’s opening date. While other aspects of the exhibition continued to be developed, such as the selection of artists, documentation of winning artworks and compilation of biographies, images and other content, the Opening Invitation was the first truly "public" display of the exhibit’s design motif. A 2nd Final Logo was chosen after additional rounds of discussions through Kennedy Center’s management and the invitations were created. 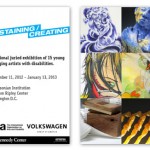 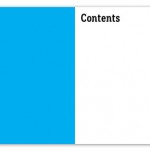 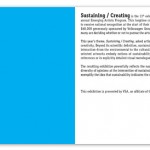 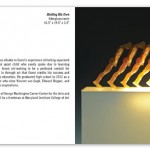 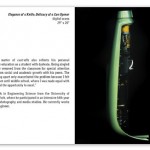 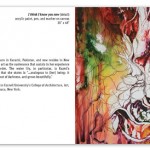 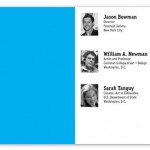 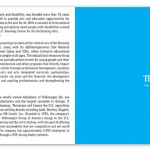 The exhibition catalogue was printed locally, allowing for a hardcopy press check and working with the printer directly to ensure quality of production per the design specifications. The final dimensions are 9" width by 6" height in closed form. The front cover displays an arrangement of the top finalists of the exhibition, with a larger arrangement of all artists featured on the back cover and the exhibition postcard. This was a small, but pleasant, shift away from the Kennedy Center’s past exhibits in which only one artwork would be displayed in full on the cover (the highest placed award winner). The design intentions in this process were well received as VSA convinced the Kennedy Center that this new move would give greater recognition to the collective strengths of all the artists in the show rather than highlighting only one beyond all others.

Taking a look at the space, what is essentially an extended length of hallway in the Smithsonian, I convinced VSA and the Kennedy Center to seek a repainting of the space for this exhibit – a design move which had not been done for this exhibit program for several years. Historically the color of the space’s walls were defined by prior installations of the Smithsonian. Working remotely with my contact at VSA and the designated painter at the Smithsonian I created a mockup of what the space would potentially look like and two separate options for production, each detailed with specific dimensions for formatting. The instructions were designed for simplicity and ease of production for the painter while offering two alternatives: which ever would be easier for the painter to produce given their own time constraints. In an extended vain, the Smithsonian’s paint choice is limited to those of Sherwin-Williams, and as none of their predefined colors would match the specific blue for the exhibit, I spent several hours in a local shop color matching. Final paint color codes were sent to the painter in Washington, D.C. where the blue was replicated by the local supplier.